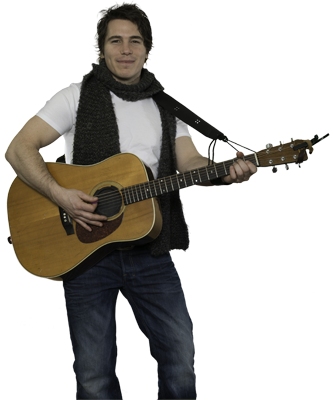 Jimmy Maguire is an accomplished guitarist, vocalist, song writer, and recording artist who can bring out the earthy depths of the soul on his acoustic or explode with high voltage energy on his electric.

Jimmy grew up on the East Coast, playing music at untamed, amazing rock clubs including CBGB's, The Black Cat, the Limelight, Bitter End, the 9:30 Club, and others. He later went on to tour all across the United States and the United Kingdom where he was able to bring his stand-out versatility to performances with rock bands, pop bands, and Native American bands.

Several years ago, Jimmy and Chad Ely met at a chance encounter at the iconic Beachland Ballroom in Cleveland (OH) where Chad was working on a video shoot and Jimmy was the opening act. They became friends, stayed in touch, and re-united recently.

When Jimmy is not performing, you'll find him writing, teaching or recording music... working on video projects... or at a playground near his Shaker Heights (OH) home where he's raising his two sons.