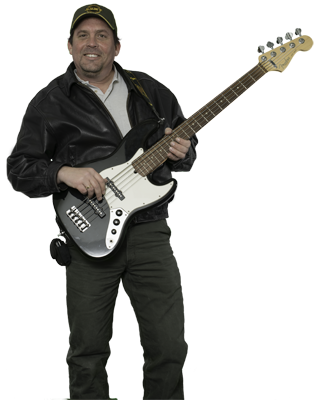 Art grew up in Madison (OH) where he began teaching himself bass guitar when he was barely a teen. It wasn't long – when he was only 14, in fact – before he was invited to form a rock band with buddies Danny Powell, Joe Wills, and Matt Judd. They called themselves Lyar.

The young men practiced every chance they got in (you guessed it!) various garages, but their favorite rehearsal spot in the largely rural, rustic and undeveloped expanses they called home was a converted chicken coop! They soon gained popularity among local teens playing at backyard parties and some local venues.

Art put his budding musical career on hold for about 4 ½ years after he joined the U.S. Army where, in 1991, he proudly served in the first Gulf War. But, even while deployed overseas, he kept his craft as sharp as possible by playing solo whenever his military duties would allow. When he returned home, along with his old pal and fellow soldier Danny Powell, he went on to perform with another Madison kid, guitarist Doug Stossel, and Chuck Kalatic in Crazy Face and Fantasy Lane.

During the past ten years, he has continued playing with Danny Powell and with Scott Seczwyck in Bound 4 Rehab, and he's been recording in his Kingsville Township home studio.