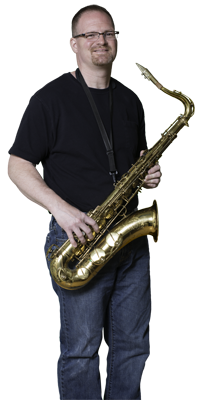 Mike was in the 5th grade, just starting to get interested in music, when he had to make his first "career decision": Trumpet? Guitar? Or saxophone? The saxophone won, and so have all of the friends and fans he's made over the past 35+ years playing in more than a dozen bands doing everything from Motown, Disco, and Jazz to Country, Beatles, and 80's/90's pop. With that kind of versatility, Mike can go from smooth and sultry to sassy and screaming – and everything in between.

His first band out of high school was called Those Guys, where, for a year, he played with his drummer brother, Eric. After about four years, Mike joined Special Request, an all-occasion group that traveled a lot and played gigs in Cincinnati, Columbus, Pittsburgh, West Virginia, and, of course, locally. During that time, they played at a lot of private events at the new venues in the Cleveland area: the Rock & Roll Hall of Fame, Great Lakes Science Center, and Jacobs Field.

After that, he joined the extremely popular Stagepass, which was primarily a Michael Stanley tribute band, but also did some Southside Johnny and Bruce Springsteen tunes as well as other assorted oldies-but-goodies.

The next stop on his musical journey was The Vibe, formed by several members of a group that had been backing a local country singer but had a big repertoire that included Motown, Disco, oldies and pop tunes. After several years, Mike decided to take some time off to spend with his family, filling in only every once in a while.

In 2008, he returned to the business and joined the popular Pieces of Eight band, where he's found a "permanent" home. Early in 2013, he took on the additional role of playing with Chad Ely and The Explosion, where he has sweet featured solo in the band's first single, "All I Need is You."