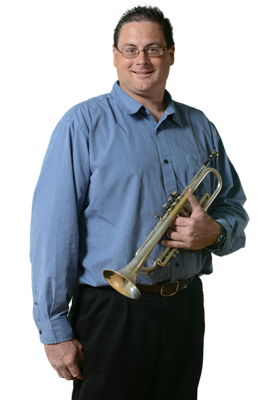 Ian has Bachelor of Music degrees in both Trumpet Performance and Jazz Studies from The University of Akron. He has a Master's of Music degree in Trumpet Performance and a Master's degree in Music Theory, both from Kent State University. He has toured nationally and internationally with the Tommy Dorsey Orchestra, performed for two U.S. Presidential Inaugural Balls in Washington D.C. and has performed with the Akron Symphony, Canton Symphony, and the Erie Philharmonic.

Over the years, Ian has performed with more than 100 musical groups in the area and frequently travels to Detroit, Chicago, St. Louis, and New York City to perform. Currently, he directs the Jazz Band at Mt. Union College.

In the past, Ian has also maintained a private studio of more than 60 students, assisted public school music programs for more than 14 years, directed music for a church for four years, and organized many other musical groups. In addition Ian has also become active as a sound engineer with various musical groups including society bands, Latino groups, Jewish orchestras, and opera productions.

He learned his sound-tech trade from Bruce Walker, an outstanding musician and instrument repair specialist who owned Walker Music, where Ian worked before acquiring the business. Now named Indorf Instrument Repair, the company is located in Tallmadge OH and specializes in repairing and customizing brass, woodwinds, and string instruments.